What the hell have you done to Stonehell? 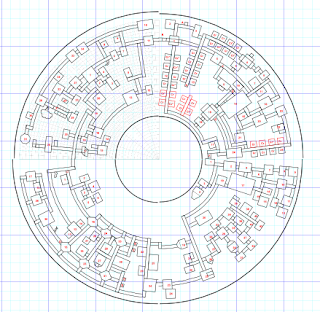 I thought I'd increase the difficulty of running Stonehell slightly by reconfiguring the maps slightly. This is the test layout of the first level of the dungeon, although I will definitely make a couple more changes from the original layout to better suit the radial nature of the dungeon.

I always found Stonehell much to cramped for my tastes. Ideally I would actually disperse it more. I am not of the school where a megadungeon needs to be fully inhabited, but rather of the school of thought that a megadungeon is an underground environment with scattered enclaves of various groups, usually separated by dull empty space in which they can skirmish or sneak through.

Apologies if anyone manages to take away any actual information about the layout of the original Stonehell from this version, but if they do they are much more skilled than I. 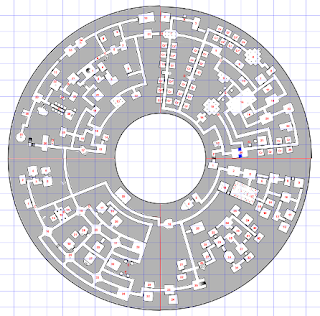 Edited to add: And here is the final result I will be using.
Posted by Reverance Pavane at 1:17 AM